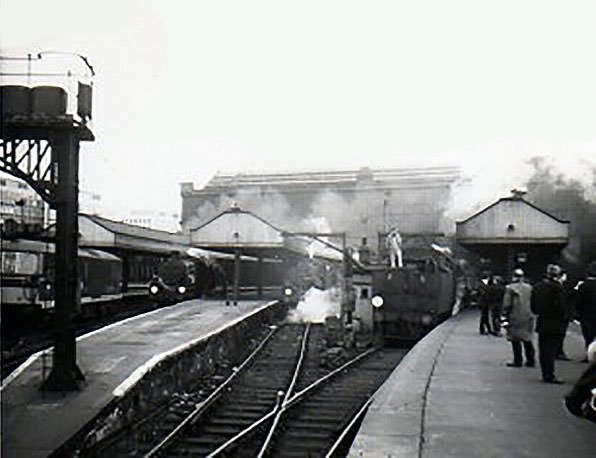 Like most boys I caught the train bug. When we lived in Southampton, my father took my brother and me to the Isle of Wight for the day.

We travelled on most of the rail system as it was in 1962- the atmosphere of grubby, dusty upholstery, hot oil and steam seeming archaic even then. I took to wandering the rail routes of Southampton, my preference being to draw plans of the track layouts from a suitable vantage, for example the long footbridge above the Terminus station.

In 1963 a friend and I were treated to weekly rover tickets, ten shillings and sixpence half fare, which took us from Romsey and Winchester as far as Amberley, Bognor and Littlehampton. All was diesel to Portsmouth, then electric, except the steam-powered Hayling Island branch, in its last year and much recorded and subsequently published by enthusiasts. I bought further rover tickets on family holidays to South Devon and Cornwall in 1965 and 1966, tho this was well into the diesel era in the southwest.

In 1964 we moved to Harrow in the north London suburbs. There was little authentic old school branch line atmosphere; I saw the last train to Belmont, and ventured by railcar to Staines West on the branch which closed in 1965. Everyone at school said I should collect steam locomotive numbers. As steam was then in full retreat, this was a bit like embarking on a study of Anglo-Saxon kings in action in 1065. I bought an Ian Allan locospotters reference book- I discovered that most of what featured in it had been scrapped before I bought the book when I acquired the sadly much slimmer new edition in 1966

I also inherited a Brownie camera (28 shillings in the shops), lovingly rationing the eight costly black and white exposures per roll of film. If you waited at Harrow on the Hill station after school, eventually a solitary Black Five would appear on its way from Nottingham to Marylebone, the last gasp of the Great Central, or occasionally there would be a London Transport red-painted ex-Great Western pannier tank on an engineer’s train. Otherwise steam’s final London stronghold was the Bournemouth and Weymouth service from Waterloo, so I’d scrape up pennies for the fare, or take a long cycle by the Grand Union Canal, to reach that terminus, across the road from Alaska Studios where fourteen years later the Soft Boys would record the Underwater Moonlight album.

Venturing to the platform end, I’d find the fleet of Bulleid Pacifics and Standard Fives, with Standard 4MT tanks and Ivatt 2MT tanks on empty stock and shunting. Other spottings were on a family visit to Bristol, where I found what must have been the derelict final stock of the Somerset and Dorset- a dozen Black 5s, 8Fs, Standard Four tanks, Ivatt 2MT tanks and panniers, and another outing to Oxford, for the family to scope the place for my older brother who would shortly go up to the university- again a dozen derelict Halls and panniers, a clear-out following the end of steam on the Western Region.

Something more had to be done. Most surviving steam was now operating some way north. A friend and I scraped up yet more pennies, and over a week ventured first to Banbury, then Tyseley and Saltley, then Croes Newydd, Bank Hall, Speke Junction and back via Stoke. We stayed in youth hostels. We nervously sought out shed foremen who were mostly the soul of courtesy at these impromptu visits.

This week accounts for most of the entries of the numbers of these vast, filthy black machines in the book- a few more Halls and panniers (tho remarkably all three survivors of the 1600 class), a few each of the different ex LMS 4MT tanks, 0-6-0s and 2-6-0s, a few dozen more Black 5s, 8Fs and 9Fs, just into double figures of Britannias, Standard 5s and Standard 4 tanks, virtually nothing ex LNER. Life returned to normal, and not long after, I lost the bug, tho I’m happy to say it’s returned, as probably to many middle-aged men, in a benign form.