43 years after the Rolling Stones’ album ‘Their Satanic Majesties Request’, here we are, four blokes and a girl, on a Saturday evening, rocking away in an obscure pub in an obscure Cambridgeshire village, having a lovely time. We wouldn’t be here now without the Beatles and the Rolling Stones- the very idea of a bunch of English people, without a particular eye to showbusiness, beyond longer hair and a brighter shirt (or skirt), making entertainment, borrowed from another race in another country at another time, wouldn’t fly, let alone as something you could do for a lifetime.

The next day, in the bath, I listen to a Rolling Stones cassette. It’s an album; there were hardly any cassette singles, and you’d have to keep climbing out of the water to change the tape. This one’s my favourite, Their Satanic Majesties Request. Wait a second, you say, that’s everyone’s least favourite, the Stones’ official ‘mistake’; how about ‘Exile on Main Street’, on which several whole books have been written?

I’m not being obtuse, or nailing my colours to some 1967 mast, as might be expected of an old Soft Boy; I just love that album. I love them all to about 1973- that’s conventional wisdom. Why TSMR? Chronologically, the Stones made albums of R&B standards (tho brand new to British ears), then of developing songwriting and maturing sound, then TSMR, then invented rock as we know it (or have tried to copy it)… TSMR is a moment along the journey- the monster but swinging groove of the band is there, the creativity has been certified 24 carat, circumstances are changing rapidly.

Picture the scene, Olympic studios, London. The Soft Boys had the good fortune to record there in 1978; engineer Glyn Johns was still around, recording Eagle Bernie Leadon. We have film of the Stones in Olympic in 1968, working on Sympathy for the Devil- so that’s what they looked like (if you can ignore the constant, strange, sixth form ranting voice over). On TSMR, however, despite the title, no one claims to speak for the devil, or be a Street Fighting Man, or Jumping Jack Flash.

We open with Sing This All Together- which the Stones do- (you can see them around the mic, with girlfriends, doing the ‘whoos’ on Sympathy for the Devil). Images of the ‘crowd scene’ on the televised taping of the Beatles’ All You Need is Love are fresh, perhaps even of Pink Floyd singing See Emily Play on the BBC’s Top of the Pops show, surrounded by their admirers in their finery. There’s the basic Jagger/Richards vocal, guitar and harmony vocal, plus plenty of joining in, singing and percussion. This was the early days of being Licenced to Add Percussion- my early gigs were often accompanied by a man with congas or bongos, who didn’t rehearse, but turned up on the day, particularly if free beer was provided. Refusal meant you weren’t a free spirit. (Bongo man was of course a free spirit). Sing This All Together fades out mid jam and returns at the end of the side (pre recorded cassettes like the original LPs have two sides, as intended) as See What Happens. Jagger self consciously daringly mutters half off mic ‘where’s that joint?’ Orchestration by John Paul Jones (another Robyn Hitchcock associate!)
Citadel- that blistering beat we know and love- two bars of Keith Richards’ guitar, then when you think it can’t get any better, Charlie and Bill crash in. Brian Jones swings into a counter melody on Mellotron as Bill’s bass switches to 3-4 on the punchline. Jones hovers over the Mellotron, which appears on no Stones album before or since, on the promotional video for the accompanying single We Love You (before the days when singles were included on albums).

In Another Land is Bill Wyman’s one and only Rolling Stones composition and lead vocal (tho I think he has the one and only solo Stone number one hit with Je Suis Un Rock Star). The story is, Jagger and Richards cancelled a session; Glyn Johns was unable to contact Wyman and Watts, so they turned up along with session keyboardist Nicky Hopkins and recorded Bill’s song- which fits very well with the mood of the album. Proof if proof were needed of the wonderfulness of the rhythm section, and of Hopkin’s song transforming keyboard magic (more later), here mostly harpsichord; you might find one in a good studio, but until about 1966 it would have been irrelevant. For more Hopkins harpsichord hear the Kinks’ Session Man and Village Green. Wyman’s voice is heavily effected- some early synthesiser gating?

Whether to disguise him or add to the dreamy mood I don’t know. The song ends with a few seconds of snoring. So much of pop music is image, and so much of the Rolling Stones’ image is druggy, particularly around this time, particularly Brian Jones (despite the world famous Jagger/Richards bust). The wisdom is he didn’t know how to stop; the band weren’t playing live much, and he was unable to regulate his intake around recording sessions; he made his brilliant contributions in the intervals between being under or over medicated. Jagger and Richards would lighten (briefly, for themselves) the problem of his unreliability by playing tricks, like immortalising his nap on the studio couch for posterity.

2000 Man- one of Keith’s most exquisite acoustic guitar parts. The 2000 Man narrates, then his children reply, over a frantic rock beat. She’s a rainbow. Unimaginable without Nicky Hopkins’ sublime piano- long solo sections, dragging the tempo, with orchestra, without orchestra, the regular Stones finally crashing in, as only they can. Check the Sympathy for the Devil film yet again; there’s a much more restrained early version of that song, then at last Keith switches to bass, Bill to percussion, Charlie to a Latin beat; Hopkins nails all together with precise but muscular and swinging piano. (Brian continues inaudibly on acoustic guitar). 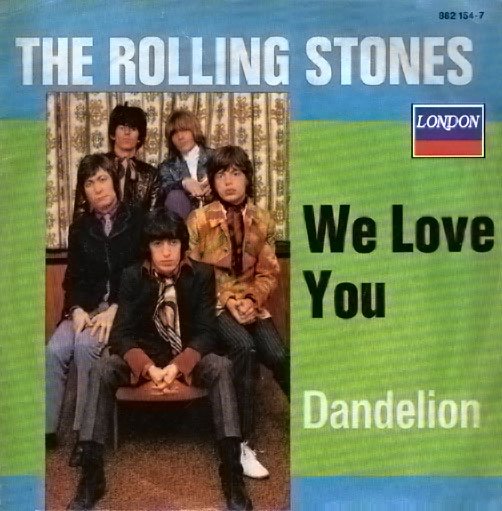 Then check the companion single to TSMR, We Love You. Again a long (especially for a single) opening Hopkins solo piano section (discounting effects of prison doors slamming), sixteenth note, virtually monophonic, the accents displaced to give a unique swing. The bass is initially just a swoop; every half bar of drums seems to be a fill, and then (technically) the wrong half. Richards’ guitar appears only in the fade, with some almost off key bends. Thruout, Jones feathers the Mellotron, on a horn setting, the attack and release as the keys push rotating loops of tape against play heads making the part a component of the rhythm, until the outro where he launches into an improvisation where he nags at a semitone, reminiscent of Ravel’s Bolero (which only became overfamiliar later on, after the Dudley Moore film ’10’ and Torvill and Dean’s successful ice dance routine to the tune). Nothing like it from the Stones before or since, and in this case nor from anyone else. In that era all hinged on the success of your latest single, and the higher you’d climbed, the further you had to fall. And there was a feeling of things moving rapidly forward- It’s All Over Now, for example, would have sounded very old hat in 1967. So when you chose and arranged a single you trod a fine line between innovation and instant recognisability.

The Lantern- more start stop arranging; the guitar has some out of rhythm tremolo effect as supplied on Vox amps- one way that, for example, the Pretty Things sound different to Bo Diddley is the difference between the original Fender design of tremolo effect and the Vox version used by British groups. In the We Love You and Sympathy films, those giant Voxes, the overgrown second generation from the AC30, supplied free to prestigious bands, can be seen with their big chrome stands, destined for evolutionary extinction; I don’t think they sold many. The Beatles soon appeared with Fender amps on the roof in Let it Be; British made Marshall amps went from strength to strength, tremolo effect free.

Gomper (meaning unknown) is a sweet tune, with a sitar inspired part from Brian, probably effected guitar along the lines of Mother’s Little Helper, and owing something too to Lady Jane (Jones’ finest psychedelic swansong has to be the sitar on Street Fighting Man, from the subsequent Beggars’ Banquet album). Another jam to finish. This is reputed to be the time when manager and producer Andrew Oldham retired, disillusioned. Production on TSMR is credited to the Rolling Stones.

2000 Light Years from Home- here comes Keith’s opening guitar riff, and Brian’s Mellotron, on a more familiar string setting- but what is he playing? There are only twelve notes, but forty six years after picking up a guitar, I don’t know what these are. But they’re there, all thru, and after everyone else has faded out. Another Jagger/Richards song put under a magic spell by a third party. Of course the song had to be there first. But that’s teamwork.

On with the Show- the big finish. The song has a predecessor, Something Happened to me Yesterday, the closer of the previous album, Between the Buttons, another nod to showbiz tradition. I’ve neglected Mick Jagger’s singing (and lyric writing) in these comments- he actually sings everything pretty sraight (the southern drawl is still in the future) until this song, sung in a pastiche early British jazz pop style (see the Kinks’ Sunny Afternoon, a number one hit in 1966). The closing piano fade uncannily resembles Peter Sellers’ playing on the Goons’ I’m Walking Backwards for Christmas.

There may be extra tracks now- I don’t know. There’s Dandelion, of course, B side of We Love You, a pleasant tune. That’s the magic of having an old cassette, until one day when it refuses to play any more, and is consigned to the bin, to be replaced by a CD, or probably by then an XLR socket straight into one’s neck. But have a listen, and thanks for reading.